A Life-Long Love of Spain 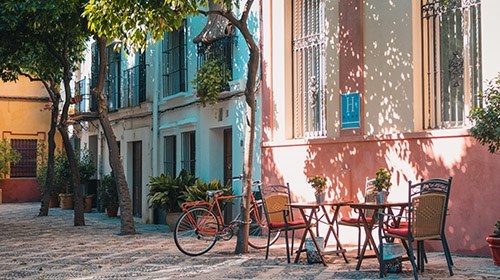 The first time I went to Spain, I was seven years old. It was the first of countless visits and the start of what has grown into a lifelong passion for discovering every corner of this fascinating country. I will visit in any season because the climate is moderate.

People rave about French cuisine but I love the distinctive Spanish culinary styles. These days, Spanish cuisine has reached multi-Michelin-star status and people travel to tiny, out of the way towns to dine at acclaimed restaurants. And the seafood is amazing along the Mediterranean and Atlantic coasts.

On my most recent trip, I was joined by husband and our son and we discovered two world-class restaurants. In Madrid, Sala de Despiece is my new favorite. The menu describes the ingredients in each dish and how it was prepared. For a worthwhile splurge, you can reserve a seat at its communal table and savor their tasting menu.

In Barcelona, we dined at Tickets, a casual restaurant run by a Michelin-star chef. The food and presentation are very creative but it is very trendy so you have to make reservations months in advance.

While in Barcelona, we took a private tour to Montserrat, a monastery that sits atop a high mountain and offers stunning vistas. People come from all over and line up to see the Black Virgin of Montserrat so I was expecting a giant Madonna and was surprised at how tiny she is.

We ended our trip relaxing and being pampered at Belmond La Residencia in Palma de Mallorca. Set on a hill overlooking the Mediterranean, the resort is gorgeous and the service is over the top. At the pool, it feels like the butler can sense the exact moment you desire a drink or a towel.

A highlight for us was joining the resort’s half-day yacht trip around the rocky northern coast. There, we snorkeled in a large cave where light streams down from above to reveal stalactites and stalagmites.

Spain packs a lot of experiences into a relatively small area. Its rich history and culture differ from its European neighbors to the north, reflecting the diverse peoples who have settled here. The Moorish influence is most visible in southern Spain and its fabulous Moorish palace and fortress, the Alhambra. And Seville reflects its gypsy influence in flashy flamenco dancing and the warm party atmosphere you feel from the moment you arrive.

Barcelona’s history as a trading city has made for ethnic diversity and an international, artsy feel. Most famously, the city is defined by its premier architect, Antoni Gaudi, whose architecture. Not to be missed is his impressive, unfinished masterpiece, La Sagrada Familia.

Madrid, Spain’s capital, has a treat for children. Most are thrilled by the idea that Spain is still a monarchy and love visiting the Royal Palace of Madrid.

And there is much more to discover. From the party island beaches of Ibiza to the art and food scene of San Sebastian and Bilbao in the north, to its many wine-growing areas, Spain truly has something for every taste.

If you are thinking of visiting Spain, I would love to help you discover some of its most extraordinary places.