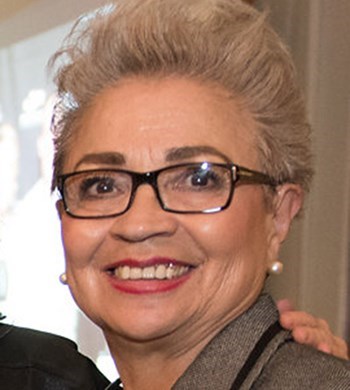 About ten years ago, my husband and I went on a 14-day Baltic cruise. For us, that is a long time out of the office, but we had never been to that part of Europe, and it was exciting to go someplace totally different.

The cruise had so many memorable moments. One that I will never forget was sailing out of St. Petersburg at midnight. It was in August, so the sun had not completely set. It was beautiful but eerie, especially seeing submarines in the water as we sailed out.

Visiting St. Petersburg felt unlike anywhere we have been. Because we did not arrange for a full visa, we were not allowed to walk around on our own and had to stay with our group at all times. Each time we got on and off the ship, a very serious guard carefully checked our passports. And everywhere we went, we felt we were being watched. In the Hermitage, for example, there was a guard in every room, and no one ever smiled. The not smiling really stood out everywhere we went.

The only exception was our guides. They were incredibly friendly and seemed very comfortable in speaking English. They seemed very Americanized. We had a million questions, and they were knowledgeable and open about their families and lives. But there were topics where they would sound like they were reciting from a script.

In Sweden, we felt very connected with the people. In Stockholm, a military band was marching through the city center, and out of the blue, when they reached our group, they played the U.S. national anthem. It made us feel so special.

A highlight of our visit to Sweden, though, was visiting a small town called Visby on the island of Gotland. The island looks like something out of Disneyland. It was on a Sunday, and people were watering flowers in their perfect gardens outside their quaint homes. Then, we saw a priest racing like he was late, so we followed him into a tiny church. It was crowded, but the usher gave us a book and seated us. The service was in Swedish, then there was a part in German, and then, in perfect English. It was beautiful, and after the service, the usher invited us to join them for coffee, and everyone tried to speak English and make us feel welcome.

One of our most touching memories was a visit to a Holocaust Centre in Oslo. There, you put on headsets and hear the King of Oslo saying goodbye to his people and personal stories about everyday people during the Nazi occupation.

Cruising is a great way to see the Baltic. It makes it easy to get to many diverse and fascinating ports of call in a relaxing and luxurious way. We plan trips around the world and, for those who want to travel in five-star luxury and explore far-flung destinations, cruising can be a wonderful way to go.