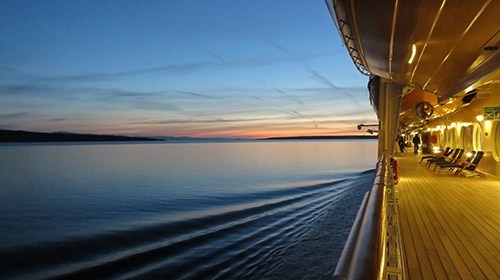 At age 20 my husband I spent the summer travelling in Greece, Israel, Western Europe, England and Scotland, Denmark and Sweden by motor scooter and car. We were the first of our friends to do so. A few years later my husband received a post doctoral fellowship to the Weizmann Institute, and he and I and our one year old son lived in Israel for a year.We spent another summer in Israel sometime later doing work and touring. When my two children were 11 and 8, wetook them on a family vacation to Europe and experienced what it was like to see amazing sites through their eyes. They still remember that trip and have have returned many times on their own and with their families. But the best and most memorable trip was when we rented a villa in Lake Garda for our family of 11 which included children and their spouses and all the 5 grandchildren. I found a fabulous spot, a comfortable villa, and everyone was happy. My husband and I have done 7 walking trips with an English company called The Wayfarers. We've hiked in France, England, Italy and the Czech Republic. Walking trips were a great way to explore countries and see sites one would not usually see. Besides Europe, I've traveled to Argentina, to Brazil, Peru including Machu Pichu, Singapore, Hong Kong, and Egypt. I've cruised the mediteraean several times and crossed the Atlantic on the old QE2. I've been on a river cruise in France and also a 12 person barge along the canals in France which was one of my favorite trips. I've hiked and camped in the Sierras, and climbed into a jeep for a Sefari trip in south Africa. I've taken each of my five grandchildren on their special trip to Washington d.C. and New York when they were the right age, usually 8 or 9. And now I am hoping to explore Puglia in Italy and try my luck at speaking some Italian.